What is a Chicago Style hot dog?

A Chicago-style hot dog, Chicago Red Hot or simply, “Chicago Dog” is an all-beef frankfurter on a steamed poppy seed bun, originating from and favored by citizens of Chicago.

It is considered a main entree.

Chicago-style hot dogs are topped with yellow mustard, then “dragged through the garden” with chopped white onions, sweet pickle relish, a dill pickle spear, tomato slices or wedges, sport peppers and a dash of celery salt. When you bite into one, you feel a distinctive ‘snap.’

What they’re NOT served with is ketchup!

Some claim the hotdog was first served at Chicago’s Columbian Exposition of 1893, the exact year that the Vienna Beef company was founded by Austrian-Hungarian immigrants Emil Reichel and Sam Ladany.

Others have claimed credit for creating Chicago-style hotdogs and the exact ingredients and assembly is thought to have evolved somewhat until the mid-1950s.

These Midwestern hot dogs are beefy and juicy, and whether they’re steamed, griddled or grilled, they snap!

What’s the difference between a Chicago-style hot dog and a New York hot dog?

Both Chicago and New York City have their unique regional take on these sausage sandwiches. They include specific ways of preparing the hot dogs and are each served with distinctive condiments;

As mentioned, the Chicago-style hot dog is a steamed or grilled frank on a steamed poppy seed bun that’s then “dragged through the garden” by being topped with yellow mustard, chopped white onions, bright green sweet pickle relish, a dill pickle spear, sliced tomatoes or wedges, pickled sport peppers and a dash of celery salt. Mmm!

The New York City style hot dog is much more simple; Often referred to as a “dirty water” sausage, they’re topped with sauerkraut, a pale deli-style mustard and a sweet onion and tomato sauce. Ugh.

The New York Style Hot Dog is considered more of a snack than a meal.

In Chicago, hot dogs have become more than just a simple street food, Restaurants like Scooby’s Hot Dogs have become internationally famous due to constant media coverage and being able to provide a gourmet experience on a budget. 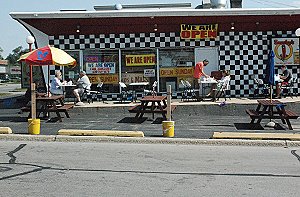 Ogden at Prince Across from Jewel